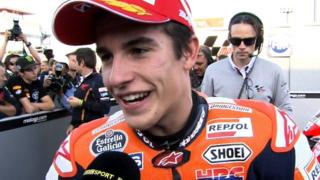 'Too much risk' in Japan for Marquez

Championship leader Marc Marquez says there was "too much risk" in fighting Jorge Lorenzo for the win and decided to settle for second place in the Japanese MotoGP.

Yamaha's Lorenzo says he is "very happy" after claiming an "important" win at Twin Ring Motegi, which leaves him with a 13-point deficit to Marquez heading into the final round in Valencia.

The battle for the World Championship will now be decided at the final race of the season for the first time since 2006, when Nicky Hayden beat Valentino Rossi.

Wales and Cherries' Brooks has cancer

The electric trailblazer who met a tragic end in Madrid

Bayern's Musiala on training with legends & choosing Germany over England