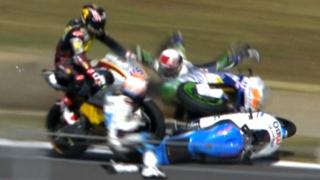 Britain's Scott Redding escapes unscathed from a a crash on the first lap of the Japanese Grand Prix that ends his Moto2 world championship hopes.

Redding manages to avoid Alex Marinelarena's first-lap crash at the exit of Turn 2, but then runs into the bike of Esteve Rabat, who had also crashed.

Redding was bidding to become the first British winner of a championship since Barry Sheene in 1977, and will move up to MotoGP next year after signing a contract with Gresini Honda.

Hoggard, Bresnan and Blain pull out of Yorkshire racism hearing

Ford partner with Red Bull in return to Formula 1