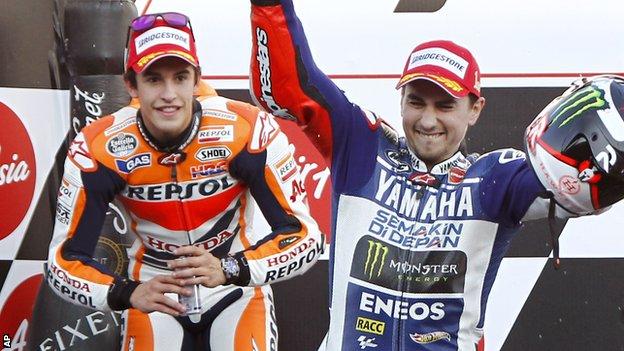 For the first time since 2006 we have got a championship that will go down to the wire.

A thoroughly professional ride by Jorge Lorenzo at the Japanese Grand Prix on Sunday ensured he won the race and kept his hopes of retaining the world title alive.

It really should have been all over by now, but the debacle of Phillip Island - where Marc Marquez was disqualified for missing a pit stop by one lap - means the excitement of the season continues until the final race in Valencia next month.

It was a similar situation seven years ago, when Nicky Hayden won the championship after being in a position similar to the one Lorenzo finds himself in now.

On that occasion Valentino Rossi was leading the standings going into the final race but crashed, allowing Hayden to take the title.

That, of course, could happen to Marquez this time, but he is once again showing plenty of maturity.

He is a born racer, but he is also not a fool.

In Japan, he pushed hard for the win at mid-distance and when he tried to pass Lorenzo we were all sitting on the edge of our chairs saying 'don't throw this away', but he seemed to get the message and did what was necessary, backing off and settling for second.

That result means he only needs to finish in the top four in Valencia on 10 November to win the championship and, as long as there are no bike issues and he doesn't get knocked off, he will wrap it up in the last race.

Honda will have to talk to Marquez's team-mate Dani Pedrosa, because they would be silly not to ask him to help Marquez in Valencia.

Pedrosa can no longer win the championship and he is under contract at Honda, so he would be foolish to go against it if they asked him to help Marquez.

The task at hand

There was disappointment for British fans on Sunday, as Scott Redding did not win the Moto2 championship.

He has had some terrible luck as the season has gone on. He fractured his wrist in Australia, which meant he missed the race and I did not expect him to take part in Japan.

But he did and then rode really well to qualify. To even go out again in Sunday's race was extraordinary.

However, it was not to be as Redding crashed in the first lap in a very unlucky incident. He basically avoided one crash and rode straight into another.

It means the wait goes on for a first British winner of a championship since my former team-mate Barry Sheene back in 1977.

Redding was as close as we have come in a while and I fear the wait will go on for some time yet.