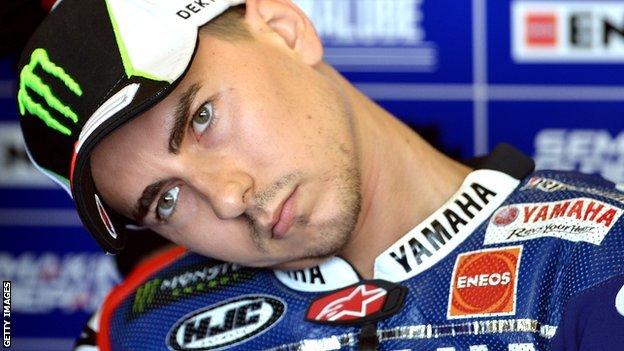 Lorenzo's win over Marquez in Motegi cut his gap to the rookie to 13 points ahead of the final race in Valencia.

"We have to be optimistic and think that we have the chance to fight for a victory in Valencia," said Zeelenberg.

If Marquez finishes fourth, he will be the first rookie since Kenny Roberts in 1978 to win the premier class title.

Lorenzo's only realistic hope of winning successive MotoGP titles is to win at Valencia and hope for his fellow Spaniard Marquez to finish fifth or lower.

Spain's Dani Pedrosa, who was third in Japan, is now out of the title hunt.

Marquez has led the championship since the eighth round at Sachsenring - a race which both Lorenzo and Pedrosa missed after breaking their collarbones in separate crashes during practice.

Since then Lorenzo has taken four victories, giving him a total of seven this year. Marquez has six.

Zeelenberg added: "We have kept our championship hopes alive until the last round. This was our mission since Jorge crashed.

"If Marc is smart and doesn't make a mistake it will be difficult to have the title this year.

"We have to be realistic, these three boys [Lorenzo, Marquez and Pedrosa] are always fighting for the podium but something can happen."

Marquez has taken a podium at every race in which he has finished this season, only failing to score points after crashing out of second at Mugello and being black flagged at Phillip Island.

Lorenzo crashed out of last year's Grand Prix at Valencia, which was won by Dani Pedrosa in a chaotic flag-to-flag race that saw riders changing from wet to slick tyres as the wet track dried out.

The Grand Prix of Valencia will be held on Sunday, 10 November. It will be the first time since 2006 that a premier class title will be decided at the final race.

On that occasion, Nicky Hayden won the title against the odds, having started the race eight points behind leader Valentino Rossi.