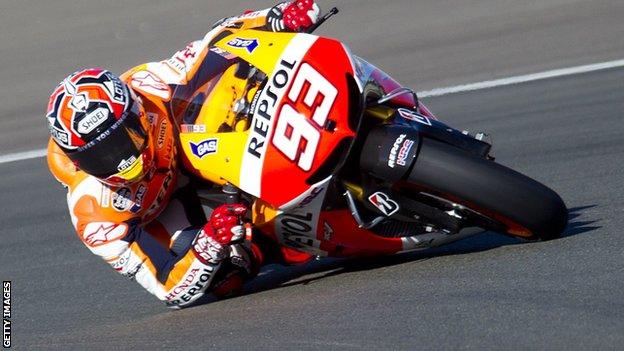 Championship leader Marc Marquez set the fastest time in practice for the final MotoGP race of the season in Valencia.

Repsol Honda rider Marquez, 20, needs to finish in the top four on Sunday to take the title in his debut season.

"It is so easy for these guys to make the one mistake which can end their chances. You are only ever one injury away from disaster and Marc Marquez will know that going into this weekend."

Defending champion Jorge Lorenzo must win and hope Marquez can not manage that to retain his title.

British rider Cal Crutchlow, in his last race for Tech 3 Yamaha, crashed late on in the session but was unhurt as he finished fourth.

Marquez has finished on the podium in 15 of the 17 races so far this season and will become the first man since Kenny Roberts in 1978 to win the championship in his rookie season on Sunday with another.

He has 318 points to his name, 13 ahead of fellow Spaniard Lorenzo, who is hoping to win for the third race in a row.

Sunday's race is the last to be broadcast by the BBC before BT Sport begin a five-year exclusive deal.