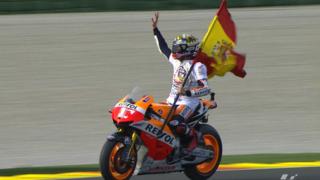 Marc Marquez becomes the youngest MotoGP champion after finishing third at the Valencia Grand Prix to secure the 2013 world title.

Yamaha's Jorge Lorenzo won the race with Dani Pedrosa second, but Marquez needed only to finish in the top four to become the first rider to win the title in his debut season since American Kenny Roberts in 1978.

Just four points separated Marquez and Lorenzo in the championship, as Lorenzo finished runner-up for the third time.

Man City level at West Ham after trailing 2-0, Leeds behind

Spurs edge past Burnley to move into fourth place