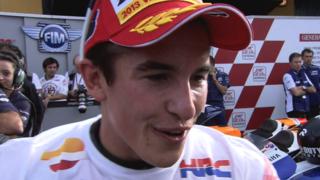 Marc Marquez says it is "a dream come true" as he becomes the youngest MotoGP champion after finishing third at the Valencia Grand Prix.

Jorge Lorenzo won the race but Marquez only had to finish fourth to become the first debut-season title-winner since American Kenny Roberts in 1978.

Lorenzo, who ends the season just four points behind Marquez, says his compatriot is a "deserving champion".

'Even by Man City standards, this was remarkable'