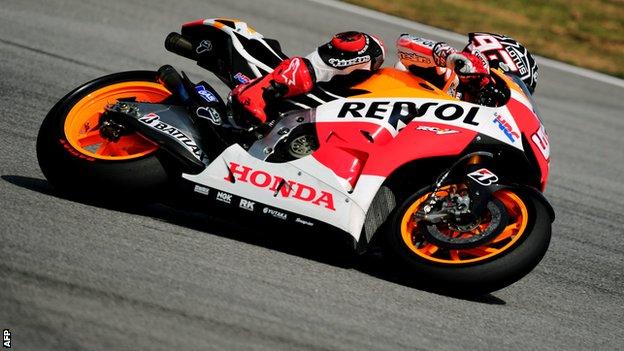 World champion Marc Marquez recorded the fastest time on day one of the 2014 season's first test session in Sepang.

Great Britain's Bradley Smith was 10th, with Cal Crutchlow in 14th after the first session of the three-day event.

Marquez, 20, became the youngest MotoGP champion at the season-ending Valencia Grand Prix in November, winning the world title in his rookie year.

The Spaniard clocked two minutes 0.286 seconds in Sepang to finish half a second ahead of six-time MotoGP champion Rossi.

Both the Italian and Pedrosa moved ahead of Yamaha's Jorge Lorenzo, who lost his world crown to Marquez last year, in the final minutes of the day.