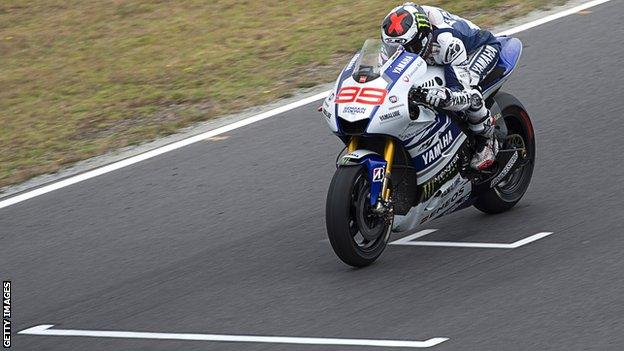 Yamaha's Jorge Lorenzo finished comfortably clear of his rivals after dominating the third pre-season test on the Phillip Island circuit.

Honda's Dani Pedrosa, 28, finished second in the third tyre safety testing session, which was held off the coast of the Australian state of Victoria.

Lorenzo, 26, had recorded the fastest time on both the first two days, and his improvement on his penultimate lap on the final day came on last year's race tyre.

Reigning champion Marc Marquez, 21, was absent due to the broken fibula in his right leg that he sustained in training last month, but the Spaniard could be fit enough to begin the defence of his title in the season's opening race in Qatar on 23 March.

A front end issue with his Ducati forced Crutchlow, who finished fifth in last season's final MotoGP standings, to finish a race simulation after 18 laps.

Briton Crutchlow, who has moved from Tech 3 Yamaha, still managed a quicker final session time than his new team-mate Andrea Dovizioso, although the Italian's time of 1:29.387 on day two was the third fastest overall.