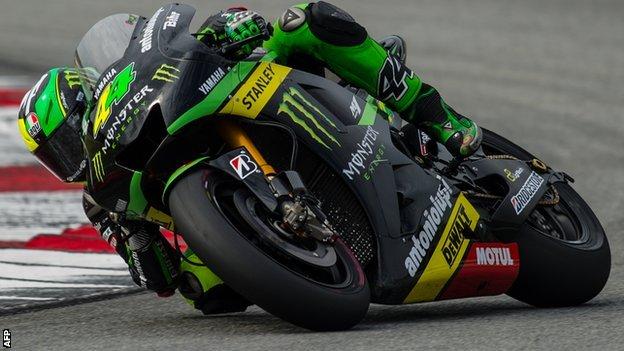 Pol Espargaro will have surgery on a suspected broken collarbone after crashing during the final testing session in Qatar before the new season.

The 22-year-old Spaniard was second fastest on his Monster Yamaha Tech 3, in a time of one minute 54.907 seconds.

But he crashed on turn six late in the session and will fly to Barcelona to have surgery on Monday.

Both Tech 3 bikes were in the top three, with Great Britain's Bradley Smith third quickest in 1:55.027.

The factory Yamaha, Honda and Ducati teams all sat out the Qatar test as they had run in Bridgestone's Phillip Island sessions earlier in the week.

Spanish world champion Marc Marquez was fastest in the first test at Sepang, Malaysia, before Italy's Valentino Rossi and Spain's Dani Pedrosa were joint fastest in the second test, held at the same venue last month.

Earlier this week, Spain's Jorge Lorenzo dominated the third pre-season test on the Phillip Island circuit, off the coast of South Australia.

The first race of the season will be held in Losail, Qatar, on 23 March.