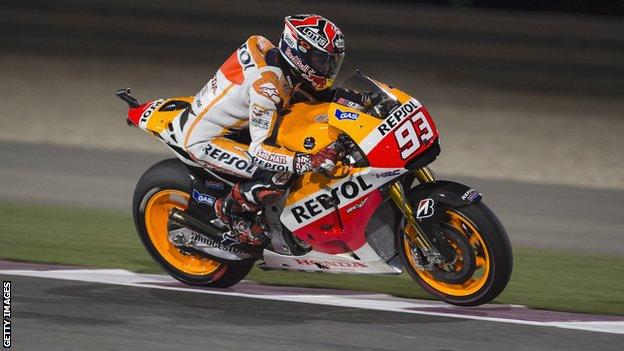 Spain's Marc Marquez won the opening MotoGP in Qatar on Sunday after a thrilling battle with Valentino Rossi.

The world champion, 21, held off the challenge from the veteran Italian, 35, despite racing with a broken leg.

Marquez pushed his Honda to the limit on the penultimate lap as he twice regained the lead after Valentino's Yamaha had edged in front.

"I enjoyed it. I did not think about the injury," said Marquez. "Last year he won, this year I won. I'm happy."

Marquez, who fractured his right fibula during a dirt-track training session in Lleida, near Barcelona last month, started in pole position and crossed the finish line 0.259secs ahead.

He added: "On the lap before the last we overtook each other two or three times which was so nice."