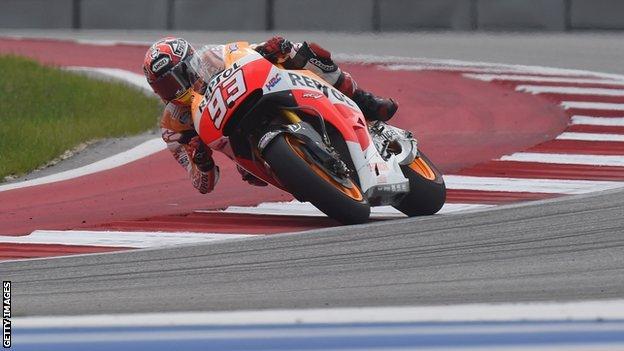 World champion Marc Marquez claimed a dominant victory from Honda team-mate Dani Pedrosa in the Grand Prix of the Americas in Texas.

The Spaniard, 21, led from pole and crossed the line 4.124secs ahead despite breaking a leg two months ago.

Marquez said: "The start was very good and after that my lead was such that the race was a bit boring."

He now leads by 14 points after two rounds of MotoGP 2014 after winning the season's opener in Qatar last month.

The Honda bikes finished over 20 seconds in front of the field and it was the battle for third that proved most exciting for spectators, with Italy's Andrea Dovizioso (Ducati) finishing ahead of Stefan Bradl (Honda) and Britain's Bradley Smith (Yamaha).

The Austin track is certainly to Marquez's liking after he claimed his maiden win in last year's race on his way to becoming the youngest MotoGP champion.

Marquez, who fractured his right fibula during a dirt-track training session in Lleida, near Barcelona in February, was never headed in qualifying or the race.

Second-placed Pedrosa said: "Marc was a little too fast for me. He was three-tenths of a second faster per lap and there was no part of the track I could close him up."

It is the first time a rider has won the first two MotoGP races of the season from pole since Australian Mick Doohan in 1995.

Britain's Cal Crutchlow was stretchered from the track after coming off his Ducati on lap 12 and his manager later said that he may have broken his right hand.