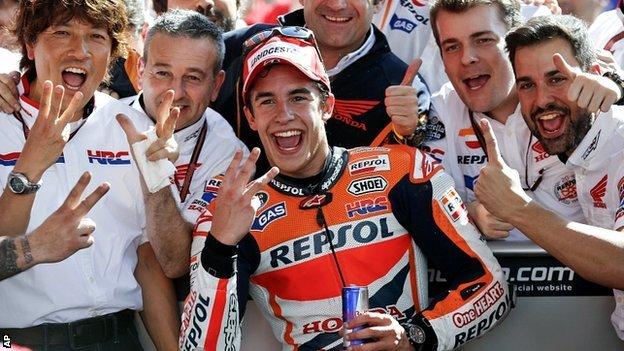 World champion Marc Marquez maintained his unbeaten start to the season with victory at the Argentina MotoGP - his third win of 2014.

The Spaniard, 21, beat his Honda team-mate Dani Pedrosa into second, with Yamaha duo Jorge Lorenzo and Valentino Rossi in third and fourth respectively.

Marquez becomes the first rider in 43 years to win the the first three rounds from pole position.

He also won the opening two rounds in Qatar and the United States.

"The beginning was difficult. My tyres were not good and I span as I was on the dirty side of the track," said Marquez, who has a perfect 75 points in the championship standings ahead of Pedrosa on 56 and Rossi on 41.

"But it was fun. Jorge opened the gap and I just kept pushing to catch him at the end."

Lorenzo said: "I didn't expect to stay in front for so many laps," he said.

"I was pushing hard but Dani was faster than me. It's a hard time for us at the moment but we need to keep strong."