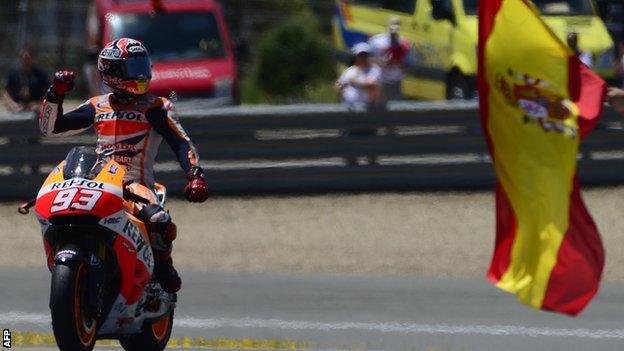 World champion Marc Marquez continued his winning start to the season with victory in the Spanish GP.

The victory, in his 100th grand prix, saw Marquez become the first man to win the opening four premier-class races of the year since Mick Doohan in 1992.

Marquez had no such problems, building a four-second lead by lap 12 and cruising home to delight a crowd in excess of 150,000.

He said: "It's a special victory because I had never won here before.

"I was expecting more of a bunched-up race but I saw that I started with a good rhythm and I was feeling in good shape."

Crutchlow said on Twitter: "Congratulations to the podium guys, a long way ahead of the rest. It's now embarrassing..."