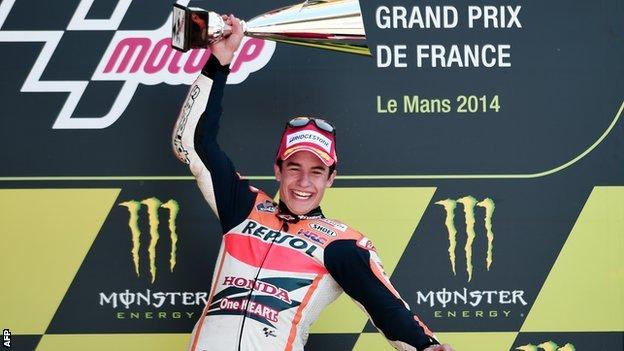 MotoGP world champion Marc Marquez overcame a nightmare first lap to battle back from 10th and become the first rider since 1972 to win the first five races of the season at the French Grand Prix in Le Mans.

In the first two corners I was too calm. I need to be a little more aggressive like last year

Bradley Smith was the highest-placed Briton in 10th.

Marquez, who also became the youngest rider to win five successive races in the premier class as he took the 52-year record from Englishman Mike Hailwood, put his sluggish start down to taking it too easy in the opening stages.

"In the first two corners I was too calm. I need to be a little more aggressive like last year," said the Spaniard.

"Today was a little bit harder than the other races. Five victories in a row is not easy so we're going to enjoy the moment."

In front of a record French crowd of 88,222 and with on-track temperatures in the mid-40s, Marquez had seemingly slipped out of contention after avoiding former world champion Jorge Lorenzo in the frenzied opening, allowing Rossi to take the lead.

However an uncharacteristic mistake from the Italian handed Marquez, who had taken a further nine laps to carve through the field to second, a golden chance to pass his great rival.

"I'm so happy about the result but it's a pity because the mistake came in the crucial part of the race. We will try in Mugello," said seven-time world champion Rossi, who will compete in his 300th race on 1 June in his native country.