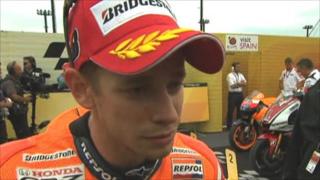 A frustrated Casey Stoner is "not happy at all" after going off the track to finish third at the Japanese Moto GP in Motegi, insisting he made "no mistake" and his brakes were to blame.

Dani Pedrosa took advantage of the Australian's slip-up to claim his third victory of the season, while Jorge Lorenzo finished second.

Lorenzo says he did not expect to get the runner-up spot, and Pedrosa is delighted to have overcome a "very hard race" to clinch first place.

Motherwell 0-0 Rangers: can hosts be first side to defeat leaders in the league?