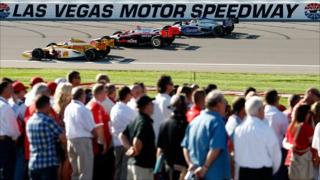 Race a recipe for disaster - Blundell

Former Formula 1 and IndyCar driver Mark Blundell is critical of the safety conditions at the Las Vegas Indy 300 after following a massive accident during the race.

Wheldon, 33, was one of 15 drivers involved in a crash at the second corner on lap 13 of the season-ending race.

And Blundell tells Radio 4's Today programme that the track in Las Vegas was unsuitable for cars of the power and speed used in Indy 300.