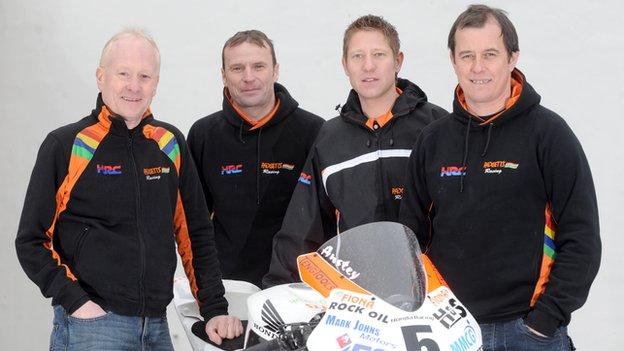 McGuinness will be joined in Clive Padgett's team by eight-time TT winner Bruce Anstey and Gary Johnson, who won his first TT in 2011.

"We've got a great team again this year and I know that all the lads enjoy racing for our team," said Padgett.

The 2012 Isle of Man TT races will get under way in June.

Padgett continued: "Everyone gets on really well and feels part of the family when they climb onto our bikes.

"I'm delighted to welcome Gary on board and I'm sure we can help him, and John and Bruce, to add to their wins on the mountain course."

New Zealander Anstey will represent the team in all five solo races and will be joined by McGuinness in both the Supersport and Superstock events.

In 2011, McGuinness won both the opening Superbike and Senior TT races to take his winning tally to a remarkable 17.

The Morecambe racer also finished runner-up in both the Superstock and second Supersport races on Padgetts machinery to claim the overall title.

The experienced pair will be joined by Johnson, who claimed his first TT victory in last year's second Supersport race. The Lincolnshire racer will compete in the Superbike and Senior races for the Padgetts outfit.

Since 2008 the Yorkshire based team has claimed victories on the Mountain Course including Ian Hutchinson's record breaking five in a week in 2010.