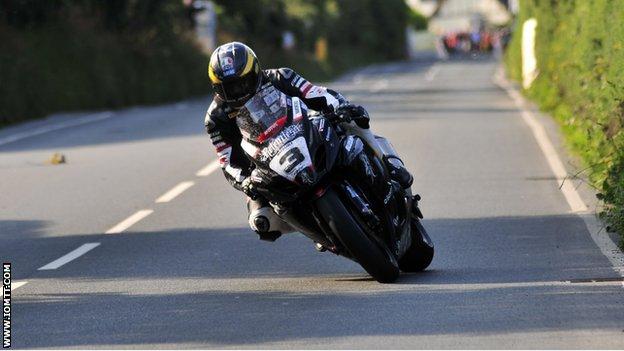 "The TT is dangerous, of course it is, but that's the reason I do it. People are killed every year, but no-one's making them do it are they?"

Meet Guy Martin, possibly the only lorry mechanic in Britain who can also claim to be named after a World War II hero, the face of TV sheepdog trials, an occasional film star and one of the fastest motorcycle road racers in the world.

Over the next fortnight, Martin will be joined by more than 200 men and women competing in the Isle of Man TT races, racing at an average speed of over 130mph - and topping 200mph at times - on closed public roads, with the best covering the 37.7-mile lap in under 18 minutes.

That's the equivalent of driving from Leeds to Sheffield in less than 20 minutes, on winding A-roads lined by stone walls and houses, while climbing a mountain in the middle.

The risks are obvious. But what if that danger is what attracts some people to the sport?

"Now I've stopped racing I do think the TT is mad but I also think it is great. I'm a huge fan. I'm completely aware of the disasters and the dangers but people like Guy Martin love it to bits. They only want to do road racing, they find track racing boring. They get huge amounts of exhilaration from it and they are willing to take the risks, and that should never be stopped. You are pushing the boundaries. It's the last of the mad things people can do."

Martin, 30, told BBC Sport: "Short circuit racing is full of health and safety but the reason I ride a motorbike is because of the danger and there is no place more dangerous than the TT. I like pushing myself.

"I don't like routines, I like to be challenged and nothing beats the buzz of going round there."

Of course, not all short circuit racing, despite the run-off areas, controlled conditions and crash barriers, is as safe as Martin suggests.

And while deaths in motorcycle grand prix racing are fortunately rare - Simoncelli's was only the fifth since 1989 - 135 riders have been killed in the TT since it started in 1907, with 20 dying since 2000 alone.

But Martin, despite stepping on to the podium 13 times, has yet to win a TT and it is a target that keeps him returning despite the inherent risks.

"It is a right dangerous place and if you keep going back the chances are it will catch up with you," he said.

"When I win a TT, I will pack it in and find another challenge. Life is all about setting yourself goals and then achieving them.

"The TT taxes your mind.

"Don't let your mind wander - if it does then usually you're dead. A split-second lapse in concentration and you can clip a kerb - dead."

Martin, who has enjoyed a manic few years which have seen presenting his own show on BBC One and starring in a documentary film, knows better than most the risks of pushing too hard at the TT.

During the Senior TT of 2010 Martin crashed his Honda at over 170mph, hitting a stone wall and destroying his bike in a huge fireball.

He should have been killed.

Instead, he was back working as a lorry mechanic within a fortnight. He laughs when asked whether that dice with death affects his approach to the race.

"I was injured but it wasn't bad - I broke eight ribs, punctured my lungs and broke my back in a few places - but the worst thing was I had a week in hospital and then another week off work.

"If there was no reason for you crashing then it would play with your head, but I was pushing hard, I was pushing too hard. I wanted to win and if anything got me into trouble it was that will to win.

"But if that is the reason I crashed then I'd be happy to do it again."

Martin - a man who took on the world's toughest mountain bike race in Austria last year, just to tick it off - has already set his sights on the next challenge - Mount Everest.

"I've got an inkling to go and do Everest next," he said.

"Obviously it is an incredibly physical challenge, but your mindset is the test as well. You'd have to be determined not to give in.

"If you let the slightest bit of doubt creep into your mind then you'll be dead. I like stuff like that.

"Keep on keeping on."