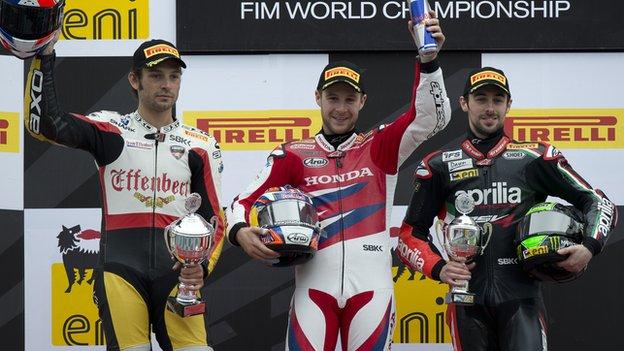 Jonathan Rea says his victory at Sunday's World Superbike round in Assen proves that his Honda team are moving "in the right direction" after some early struggles in the campaign.

Rea took victory in the second race in Holland after suffering a finger injury when crashing in Sunday's opener.

"We would be lying if we said we are happy with the bike," said Rea.

"We need to improve in a lot of areas but the win is motivation for all the guys to keep working."

Rea was especially pleased that he managed to take the victory at his Honda team's home event.

The victory came after the "frustration" of crashing out during the second part of the re-run opening race.

"When the second part came, I got a little bit caught out with the conditions.

"I took the top off my right ring finger in the crash and I ran directly to the race clinic to get some local anesthetic injections to put it to the back of my mind because I was in a lot of pain.

Rea will have further dressings applied to his finger after his return to his Isle of Man base this week but he has been told that he will not require surgery.

The next round of the Championship takes place at Monza in Italy on 6 May.

Eugene Laverty, who was fifth in Sunday's opener, ensured there were two Northern Ireland riders on the podium after the Toomebridge man came third in the second race.

It was a fourth win in six races for Rea at the Dutch circuit and leaves him sixth in the standings, 27 points behind leader Max Biaggi.

Laverty is now eighth in the championship standings.