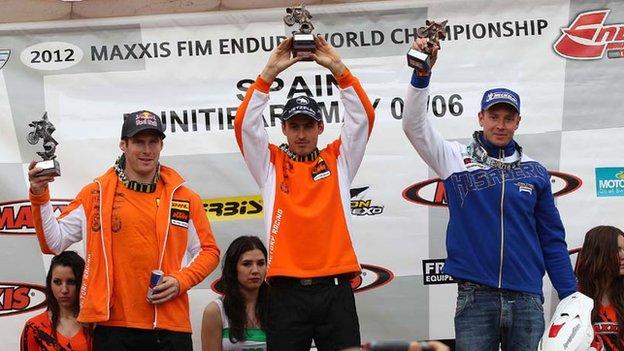 David Knight says he "couldn't push any harder" after claiming a double podium at the third round of the Enduro World Championship in Spain.

The result means the Manx rider remains second in the Enduro 3 class standings, behind his French KTM team-mate Christophe Nambotin.

"There is no way I could get close to Christophe. He rode really well," said the 33-year-old from Ballaugh.

After three rounds Nambotin still has a 100% winning record.

Knight added: "It was a hard weekend for me. Conditions couldn't have been more different to what they were in Chile and Argentina, and it was really tough on the bigger bike.

"Riding a big four-stroke in slippery, muddy conditions is always hard and this weekend I just couldn't push any harder."

Nambotin leads Knight by 24 points in the overall standings with Sweden's Joakim Ljunggren third on 86 points.

Meanwhile, the Isle of Man's Danny McCanney remains third in the Junior class after recording sixth and third-place finishes in Euskadi.

The fourth round of the EWC will be held in Portugal on 12 and 13 May.