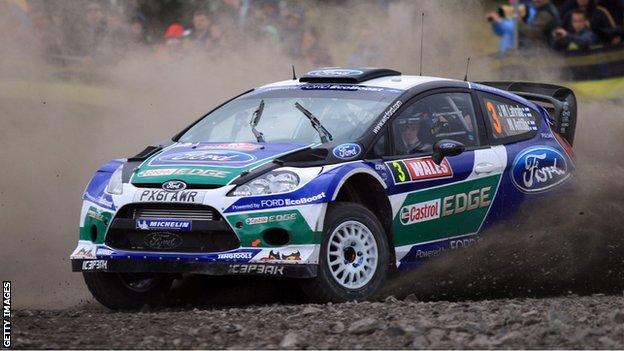 Latvala led practically from the start of the 10th leg of the World Rally Championship, finishing 27.8 seconds ahead of championship leader Loeb.

Petter Solberg, Latvala's team-mate, was a further 0.9sec back in third.

The result prevented Citroen from claiming victory in the constructors' championship.

But both Citroen and Loeb will expect to be crowned champions at the Rally of France in Alsace on 4-7 October.

Despite a late fightback on Sunday, Loeb was unable to undo the damage inflicted during the first two days of the race, when Ford proved more adept at handling the slippery roads in the south Wales countryside.

He did, however, succeed in overhauling Solberg, who began the day more than six seconds in front of him.

Latvala recorded the seventh victory of his career and his second win this season, after a previous success in Sweden.

It enabled Ford to bring an end to a run of five straight victories for Loeb, who is nonetheless closing in on his ninth successive world championship crown.