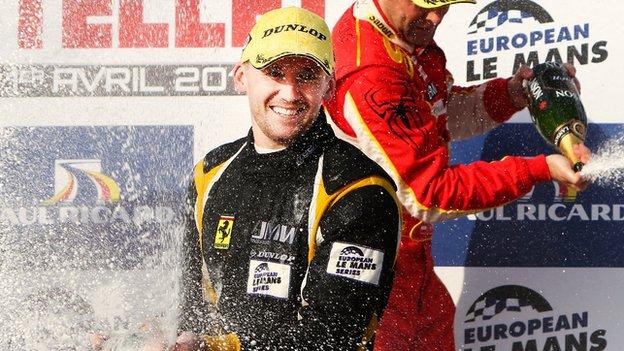 Jersey driver James Walker is targeting a podium finish on his first appearance at the world-famous Le Mans 24 Hour race.

Walker has confirmed he will be behind the wheel of the JMW Motorsport Ferrari 458 at next month's endurance event.

"We have won three of the last six Le Mans Series races so we arrive as one of the favourites," explained the 28-year-old.

"Being selected to race in the event is such a special moment for me."

The test day is on Sunday, 3 June with the main race taking place on 16 and 17 June.

And Walker says he is keen to put on a good show in front of the huge crowds which flock to the circuit each year.

He said: "Since the news broke that I would be racing I've had so many people contact me to say they will be going to watch.

"I've been to Le Mans as a spectator before and the atmosphere is like nowhere else so it will be great to sample it from a driver's point of view.

"I think if we do a good job as a team we will be in with a shot of the podium so it would be a great feeling to give the spectators something to shout about."

Walker secured a spot in the 24 hour race after coming second overall in his class in the 2011 Le Mans Series alongside team-mate Rob Bell.