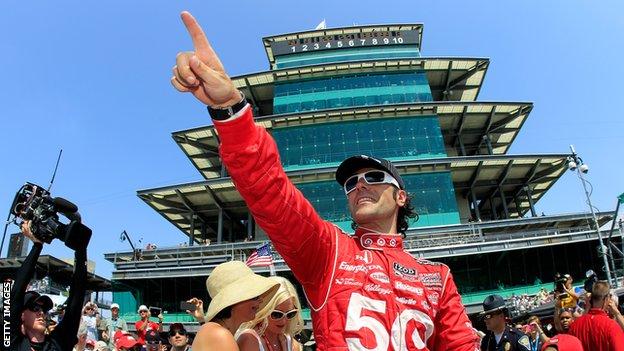 Scotland's Dario Franchitti won the 96th Indianapolis 500 on Sunday to join an elite band of drivers to take the race three times.

Franchitti, 39, who started 16th on the grid, cruised home ahead of team-mate Scott Dixon and Tony Kanaan.

In the winner's circle, Franchitti donned a pair of white sunglasses to honour British compatriot Dan Wheldon, who was killed last year.

"I want to thank all the fans for saluting our Dan," he said.

Driving for the Ganassi Racing team, Franchitti also won the Indy 500 in 2007 and 2010 and became just the 10th driver to win at the Brickyard at least three times.

Only AJ Foyt, Al Unser and Rick Mears, with four wins each, have been more successful.

"This means the world, this is Indianapolis," said Franchitti. "To be on this trophy either side of Dan, that means more than anything."

Ten of the original 33 starters were not running at the end of the 200-lap event on a baking hot day.

Japan's Takuma Sato spurned his chance of victory when he crashed on the last lap.