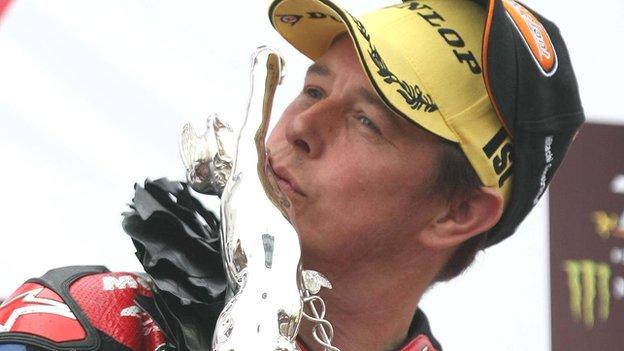 McGuinness was pushed all the way over the six laps by Australian Cameron Donald but ended up with a 14-second advantage over his fellow Honda rider.

The Morecambe rider set the fastest lap at 130.48mph on his fourth circuit.

There was disappointment for Manx rider Conor Cummins before the start when he announced that he was opting out of the race to allow further time for his injured wrist to heal.

McGuinness led in the early stages but it was Donald who enjoyed a 0.2 second lead at the end of lap one, thanks to his quickest ever lap of the Mountain Course at 130.25.

McGuinness redressed the balance after lap two to lead by two seconds on his TT Honda Legends Fireblade.

Anstey's third place made it a clean sweep of podium places for Honda.

Michael Dunlop finished 10th on board his Kawasaki Superstock bike, which he chose to ride in preference to his Honda Superbike.

Ryan Farquhar, Ian Lougher, Michael Rutter and Adrian Archibald were among the retirements.

Simon Andrews crashed at Grahams on lap one and suffered a cracked shoulder, a broken wrist and a fractured ankle in his crash.

In the first of the week's two sidecar races Manxman Dave Molyneux secured his 15th TT win, with Patrick Farrance in the chair.

Molyneux's victory means that he has now won races with all the major manufacturers.

The pair led from start to finish and held a 22-second lead over brothers Ben and Tom Birchall at the chequered flag.

Conrad Harrison and Mike Aylott were a further 14 seconds behind the Birchalls in third.

Molyneux set the fastest lap of the race at 113.43mph, with the Birchalls lapping at an impressive 112.97 on their final circuit.

John Holden and Andrew Winkle and Tim Reeves and Dan Sayle were expected to challenge for the victory, but both retired on lap one.