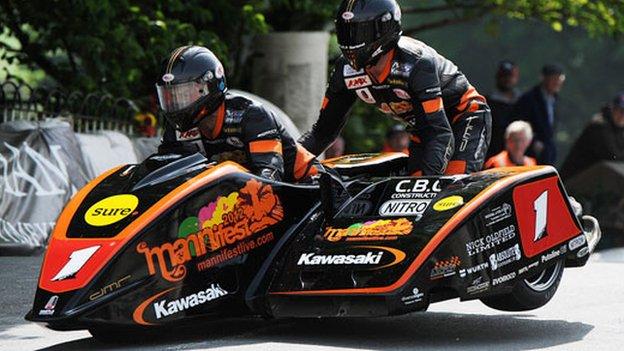 Molyneux's victory means that he has now won races with all the major manufacturers at the Isle of Man event.

"It is great to win and I couldn't have done it without Patrick today. We are made up," he said.

The pair led from start to finish and held a 22-second lead over brothers Ben and Tom Birchall at the chequered flag.

Only Joey Dunlop (26) and John McGuinness (18) have won more TT races than Molyneux.

It was former world champion Farrance's maiden win at the TT.

Conrad Harrison and Mike Aylott were a further 14 seconds behind the Birchalls in third.

Molyneux set the fastest lap of the race at 113.43mph, with the Birchalls lapping at an impressive 112.97 on their final circuit.

John Holden and Andrew Winkle and Tim Reeves and Dan Sayle were expected to challenge for the victory, but both retired on lap one.