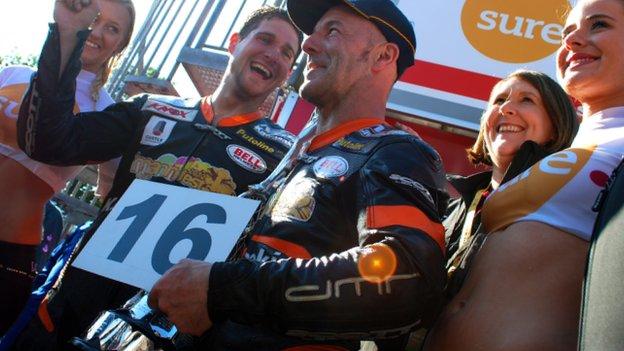 Isle of Man sidecar star Dave Molyneux claimed his 16th TT victory with Patrick Farrance in the chair on Wednesday to make it a TT double.

The duo, who also won Saturday's opening race, saw off the challenge of Tim Reeves and Manxman Dan Sayle to win by 17 seconds.

Molyneux said: "It's brilliant. We beat a few world champions there. We must be doing something right."

Molyneux and passenger Patrick Farrance led early on the first lap, but Ben and Tom Birchall then moved ahead.

By the end of the opening circuit, Tim Reeves and Dan Sayle had hit the front, enjoying a 4.5 second advantage over Molyneux.

Farrance said: "To win one was the most amazing achievement, to win two is incredible.

"Racing with Dave is like playing for the best football team in the world. I am over the moon."

The Manxman's lead at the chequered flag was 17 seconds.