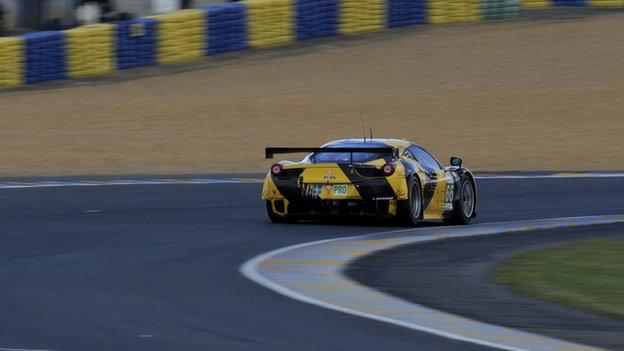 James Walker will be hoping to repeat past Donington Park performances in Sunday's second round of the European Le Mans Series.

Walker has made the podium at Donington before in Formula Ford and Formula 3 and won in the World Series by Renault there in 2007.

There's no reason why we can't be up at the front

"I have special memories of the place," said the 28-year-old.

"I think the track will suit the Ferrari too as the majority of the corners are fast ones with some big braking areas.

"This weekend we will be looking for a mistake-free race and, with our home knowledge, there's no reason why we can't be up at the front from the word go."

Walker is a former student of the nearby Trent College and lived in Long Eaton for two years, not far from the circuit.

Sunday's race comes less than a month after he drove in the world-famous Le Mans 24 Hours event for the first time, alongside Cocker and team-mate Roger Wills.

They were forced to retire after 204 laps because of a problem with the car's driveshaft, but Walker says the experience has taught him a great deal about endurance racing.

"Having never seen the circuit it was always going to be tough but it was unforgettable.

"Our JMW Motorsport team members were there the best part of three weeks working flat out every day.

"Seeing how hard they work and how dedicated they are inspires me to push as hard as I can every lap."