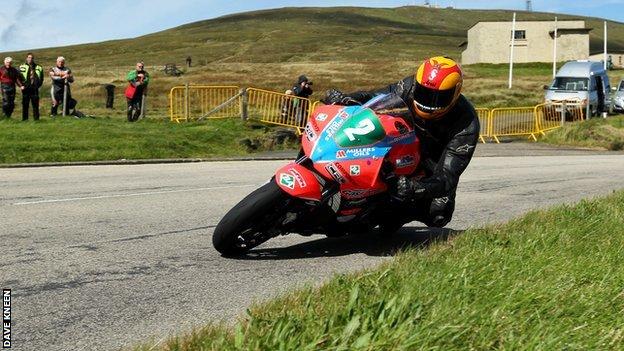 Nigel Moore and Ross Johnson joined Ryan Farquhar and Dave Madsen-Mygdal as winners at the Manx Grand Prix in the Isle of Man on Wednesday.

Moore claimed his first Manx Grand Prix victory in the SuperTwin Class by an emphatic 51 seconds ahead of Michael Sweeney with Brian Mateer third.

"It's brilliant to win. I can't believe it," said the Northern Irish racer.

"I've been trying to win this for 13 years and I am absolutely chuffed to bits. I didn't expect it to be quite as tight as that," Johnson said.

Farquhar recorded a five-minute winning margin on his 499cc Paton ahead of Norton-mounted Chris Swallow, his 10th MGP victory.

The 36-year-old from Tyrone said: "It went spot-on. I got my head down from the start and it went well."

"It cut out when I came out onto the main road and it was a long push from there. I didn't think I was going to make it but the cheers from the crowd and the marshals kept me going.

"No-one told me it was going to be that hard," he added.

The Douglas rider averaged 99.111 mph to claim his maiden win on the Mountain Course, ahead of Mark Parret and Adam Ward.

He said: "I'm a little bit of a late starter but I am absolutely made up to get it. Everyone has been working so hard, I just ride the bike."

Racing will continue on Friday with the Classic Superbike and Junior Post Classic races followed by the Senior race.