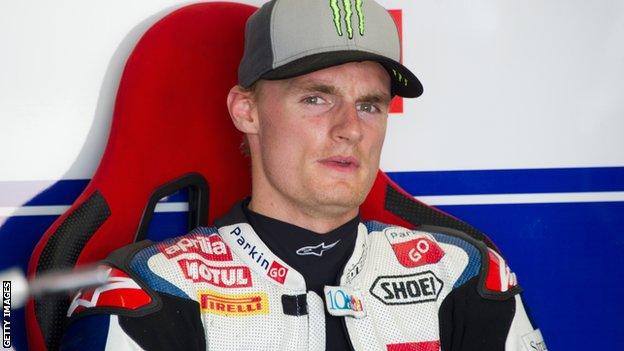 World Superbikes rider Chaz Davies has refuted claims that he will be BMW Motorrad's number two rider behind Marco Melandri for the 2013 season.

Herefordshire rider Davies recently joined the BMW team, and has sought assurances he will be Melandri's equal.

"I actually have it in my contract that we are to be given the same equipment," he told BBC Hereford and Worcester.

"A powerful team like BMW can work in that way because they have the resources to make the kit."

I think a lot of people automatically assumed: 'He's splitting from ParkinGo' but it wasn't like that at all

"There will be a lot of competition between Marco and myself but the team has already assured me it will be a level playing field."

Davies made the switch after a successful debut season with the Aprilia ParkinGo team where he won in Germany and enjoyed three other podium finishes.

And the 2011 World Supersport champion admits it was something of a wrench to leave a team with which he has enjoyed so much success.

"It's tough because they plucked me from a bad situation a few years ago when the prospects were not looking very good," he said.

"I was racing in America and the economy was taking a downturn over there and particularly in the racing world where nobody was spending money.

"I got the opportunity to come back to the World Supersport Championship with them and it's where I have stayed ever since.

"It is a shame but you have got to make a change one time in your life and this is a big opportunity for me so we will go for it and see what happens," he added.

The Knighton-born rider is keen to stress he leaves the ParkinGo team on the best possible terms and said they were keen for him to take this chance to further his career.

"I think a lot of people automatically assumed, 'He's splitting from ParkinGo,' but it wasn't like that at all," he said.

"It was more the opposite as they want to see me progress and they think it's a good opportunity for me to do that."