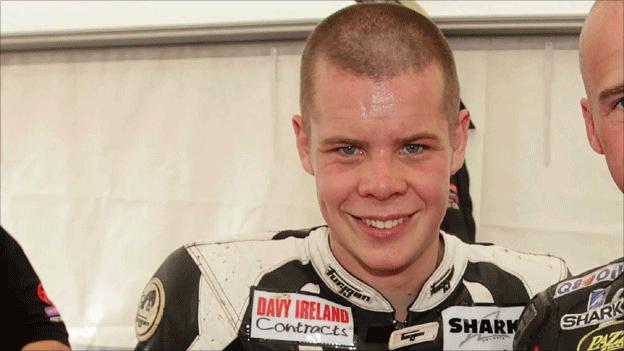 Hamilton, riding an RPM Performance Honda, had been allowed to compete in the race despite failing to make the qualifying time.

Saintfield's Davy Morgan was the best of the NI riders in 19th on his first appearance at the Far East circuit.

Stephen Thompson and Lee Johnston failed to start the race, which was won by Michael Rutter for the eighth time.

Simon Andrews completed the podium on his first return to action since crashing in the Superbike race at the Isle of Man TT in June.

Fermanagh rider Johnston was ruled out of the event because his RPM Performance Ducati was not fit for participation after a practice crash, in which he was unhurt.

Thompson withdrew from the event as he struggled with a neck injury sustained in a crash at the Ulster Grand Prix.

Gary Johnson, Austrian Horst Saiger and Conor Cummins made up the top six, with John McGuinness having to settle for seventh after overshooting at the Lisboa section of the course.

The meeting was overshadowed by the death of Portuguese rider Luis Carreira in a practice crash on Thursday.