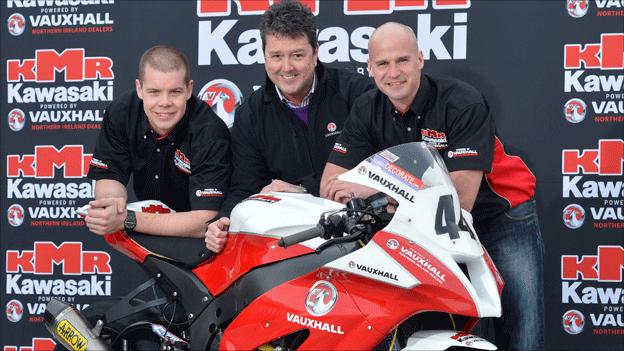 KMR Kawasaki boss Ryan Farquhar has confirmed that Jamie Hamilton will again be part of his team for the forthcoming road racing season.

Hamilton will be joined in the set-up by Cheshire rider Connor Behan, a former short circuit rider, who will take in his first full year on roads.

Meanwhile, Farquhar is expected to field as many as five riders in the North West 200 Supertwins races in May.

Jeremy McWilliams and Michael Rutter are poised to ride for the team again.

The duo followed Farquhar home to complete a clean sweep of the top three places at the inaugural Supertwins race at the North West last year.

They will be joined in the Supertwins class by Maguiresbridge rider Lee Johnston.

The Dungannon-based outfit, which will enjoy major sponsorship from Vauxhall, will also compete at the Isle of Man TT in June, with the line-up for that event still to be finalised.

Hamilton, 21, will continue to compete in the Superbike and Supertwins classes in 2013, and will also campaign a Supersport 600cc machine this term.

He will race at the North West, TT , Ulster Grand Prix, the Irish national road races, the Southern 100 and three events at Scarborough.

Behan will contest the Junior and Senior Irish Support race championships and also take in the Manx Grand Prix for the first time.

The 22-year-old finished third in the 2011 National Superstock Championship and fifth in the 2008 British 125cc series.

"Retaining Jamie was always a main priority so I'm delighted to have done that - he did a great job for the team in his debut year in 2012 and I have every confidence he'll do even better in 2013," said Farquhar.

"My personal involvement as a rider may have come to an end but I'm busier than ever and am really relishing my new role, eagerly looking forward to the first meetings in April.

Meanwhile Lee Johnston will ride Superbike and Superstock bikes for Team Rapido Sport Ducati at the international road races and in the British Superstock championship.

Stephen Thompson and Nigel Moore will ride for the Cookstown/BE Engineering team, which will be run by John Burrows, who, along with Farquhar, has retired from the sport.