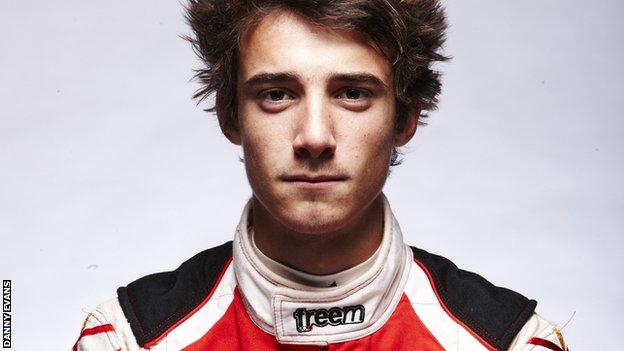 Jersey driver Struan Moore says he is "absolutely delighted" after agreeing a contract with Hillspeed to race in the inaugural Formula 4 Championship.

Moore, who signed the deal on the day he turned 18, started racing at the age of eight when he took up karting.

He is being coached and managed by fellow Jersey driver James Walker.

"It's very exciting to be part of something in it's maiden season," Moore told BBC Radio Jersey.

• Begins at Silverstone on April 27

"There's bound to be problems along the way, but it's fantastic to be on the first list of drivers ever to do the championship.

"It's quite an honour and I'm really proud to represent Hillspeed for it."

Moore is the Derbyshire team's first confirmed driver for the championship, which is just two months away.

In 2011 he graduated into Ginetta Juniors with Hillspeed, ending the year 12th with three podiums.

"Formula 4 is looking like it's going to be an exciting championship and it is great to see BRDC showing their support at this level of the sport," said Moore's manager Walker.

"New championships always create a lot of buzz, so I think the eyes of the industry will be on who does well in 2013."

The first ever season begins on 27 April and will feature 24 races across eight event weekends.

All 24 single-specification cars have been sold to 14 teams in preparation for the first rounds at the Silverstone Grand Prix circuit.

"I find motorsport such a challenge and such a thrill every year," said Moore.

We're here to get podiums and we're there to win races

"We're here to get podiums and we're there to win races and that's the plan from the outset."

Formula 4 organisers say they want it to become the series of choice for drivers moving into single-seater racing.

For Moore it is the latest step in his development since the days of winning the Jersey Kart Club Cadet and Junior Mini Max titles in 2006 and 2007 respectively.

"I'm sure he's going to be capable of running at the front in Formula 4 this year from the outset.

"Although he only had a few outings last year in Formula Renault, Struan did a great job and definitely showed the potential we know he has to be a successful single-seater racer.

"We're very much looking forward to a strong first season in Formula 4 with him."