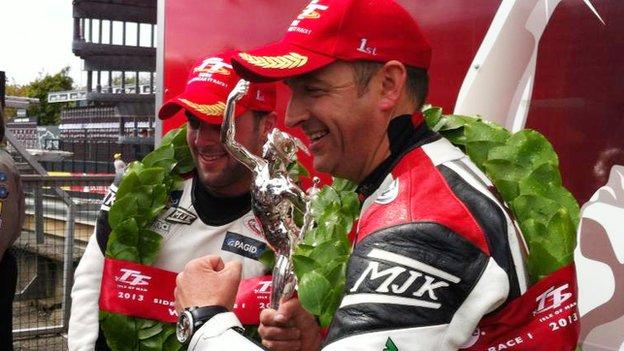 With Manxman Dan Sayle in the chair, Reeves came home 20 seconds ahead of runners-up Conrad Harrison and Mike Aylott.

Early leaders Ben and Tom Birchall retired at Creg Ny Baa on lap one with a puncture.

His advantage at the end of lap one was 10 seconds and the Honda driver extended his lead to 20 seconds by the end of the race.

Sayle's victory saw him equal Rick Long as the most successful sidecar passenger in the history of the TT with eight wins.

"I'm so happy," said Reeves. "Jock Taylor was my hero and he won a TT while he was world champion. Now I have done the same."

Kawasaki crew Molyneux and Farrance held second for most of the race but saw that position snatched away by Harrison and Aylott, who enjoyed a 0.5 second lead over their rivals by the end of the race.

The second sidecar event is scheduled for Wednesday.