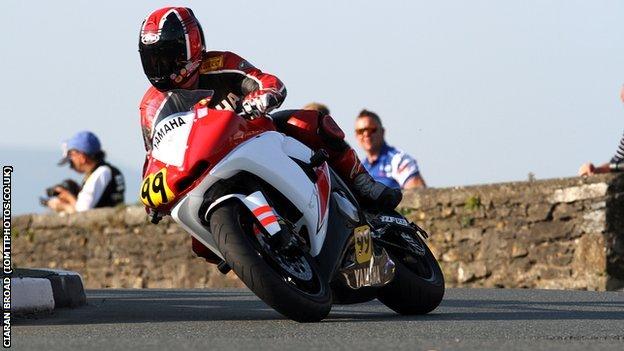 A rider has died in an accident during the opening practice session for the Southern 100 road race meeting in the Isle of Man.

David Jukes, 46, from Douglas, died in an accident on the approach to Ballakeighan Corner on the Billown Circuit at 19:15 BST on Monday.

The rider's family are being supported by the Auto Cycle Union's (ACU) riders' welfare officer.

Spectators who witnessed the accident are asked to contact Port Erin police.

Jukes, who was a regular competitor at both the Southern 100 and Manx Grand Prix, leaves a partner and a young son.

In a statement the event's organisers said they wished to extend their "sincere condolences to families, relatives and friends at this very sad time".

It added that they will be "carrying out a full investigation into the circumstances of the incident".

The Coroner of Inquests has been informed.

It is understood the crash occurred during practice for the 600cc Supersport class, the fourth practice session of the evening.

Practice was cancelled following the accident but the meeting will continue later with a revised schedule.

Solo machines with green plates will be the first session out on Tuesday evening, followed by the Sidecars.

The practice session will be followed by the event's opening two races.