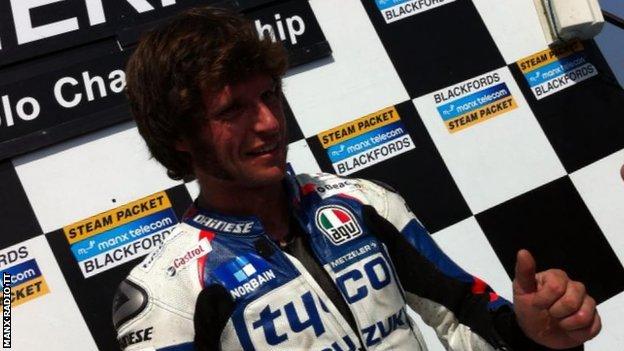 Guy Martin has beaten Michael Dunlop by less than half a second to win the Southern 100 Solo Championship.

Martin crossed the line just 0.454 seconds ahead of the Northern Irish man, who has already won two races this week.

Dean Harrison completed the podium but was more than 20 seconds down on Dunlop.

Joey Dunlop secured the prestigious title of Solo Champion in 1976, 1977 and 1978 and is the only rider who has achieved that feat in the history of the event.

Tyco Suzuki star Martin last won the premier prize at the 2009 meeting and said he was "made up" to reclaim the title.

The pair beat fellow TT winners Ben and Birchall by just one tenth of a second after six laps.

Earlier in the day there were wins for Rad Hughes and Andy Soar.