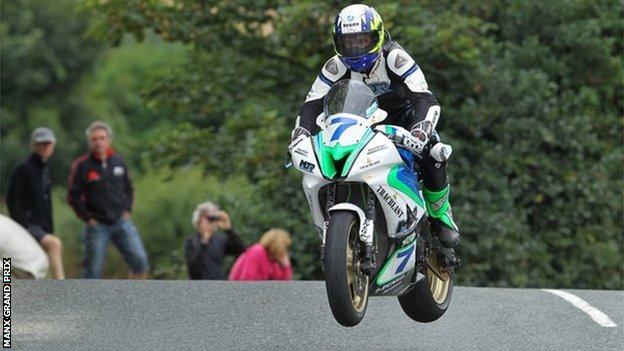 Cowton held a 16-second advantage over Sweeney at Cronk-Ny-Mona on the final lap, but had to pull up with less than a mile of the 150-mile race to go.

Skerries man Sweeney, who was the fastest qualifier, won the race by 40 seconds from Michael Russell.

Sweeny said he was "delighted" to take the chequered flag.

Both riders were taken by airmed to Noble's Hospital with Taylor reported as sustaining "minor injuries" and Llewelyn suffering "arm and leg fractures".

Redhill's Gabrielle Burne was also taken by airmed to Noble's after receiving a knee injury after coming off at Guthries.

Rodney Little and Faroe Island's rider Terje Joensen were both reported as okay after racing incidents.