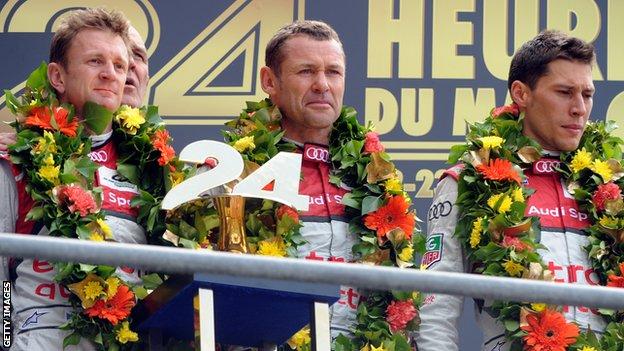 Scotland's Allan McNish has secured the World Endurance Drivers' Championship in Shanghai along with team-mates Tom Kristensen and Loic Duval.

The Audi trio led the championship going into the penultimate race of the series in China, where third place was enough to secure the title.

It is 43-year-old McNish's first world title in his 25-year career.

"I've been waiting on this since 1985," said McNish. "I feel massively proud of what we've achieved this year."

The Dumfries driver is now the first British sports car world champion since Derek Warwick won the title in 1992.

I had three cracks at a world championship in karting, finishing third once, and that one hurt because I was close but no cigar. To finally crack it, it's third time lucky

Reigning champions Marcel Fassler, Andre Lotterer and Benoit Treluyer, the only team that could deny them the title, finished first in Shanghai in the other Audi.

But McNish, Kristensen, from Denmark, and Frenchman Duval had a 40.75-point lead going into the race, with only 52 points available in the final two legs of the series.

The Toyota of Nicolas Lapierre and Alexander Wurz, who had started first on the grid, came second.

McNish and his team-mates had qualified fourth but did enough to secure the title.

They have won three races in their R18 e-tron quattro - including Le Mans - and been runner-up on three occasions in the seven events so far.

"I had three cracks at a world championship in karting, finishing third once, and that one hurt because I was close but no cigar," said McNish.

"In Formula One, there wasn't really an opportunity, so to finally crack it, it's third time lucky.

"We came out of the blocks fighting at Silverstone and we had a really good run, especially at the Circuit of the Americas, which was a turning point for us because it allowed us to come here and drive a very conservative race.

"But right now, I've a massive warm feeling inside - and a very wet backside because of Mr Wurz pouring champagne down my back."

Toyota duo Wurz and Nicolas Lapierre, who had appeared for some time as if they would win the race, were forced to settle for second by 16 seconds to Fassler, Lotterer and Treluyer.

McNish and his crew would have finished fourth but for the second Toyota, driven by Anthony Davidson, Sebastian Buemi and Stephane Sarrazin, retiring from the lead in the penultimate hour when a bolt in the right-front suspension sheered.