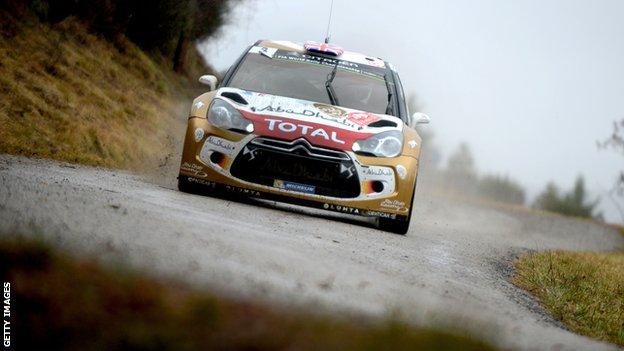 Dungannon man Kris Meeke is in second place after the first day at the Monte Carlo Rally, the opening event of this year's World Championship.

Meeke, who is one of Citroen's two drivers this season, is 38.80 seconds behind Frenchman Bryan Bouffier, who is competing for Ford.

The 37-year-old was handed the Citroen spot after competing for the team as a guest driver twice last season.

Meeke is less than a second ahead of third-placed Robert Kubica.

Ex-Formula 1 star Kubica showed he is making a successful comeback from a career-threatening injury by winning the first two stages and finishing the day ahead of defending world champion Sebastien Ogier.

The Polish driver had to quit Formula One after he nearly severed his wrist in a minor rally in 2011.

Although he took part in a handful of races last season, Kubica, 29, is starting his first full season in the world rally championship in a Ford with a reconfigured gearshift and handbrake because of the limited strength in his right hand.

After being fastest in the opening two stages, Kubica struggled on the snow in the undulating third stage, finishing a lowly 21st as he dropped down to fourth overall while Bouffier took the overall lead.

Kubica regrouped to battle for second place with Meeke during Friday's remaining three stages, with the Northern Irishman taking a .70 of a second advantage over the Pole by the day's end.