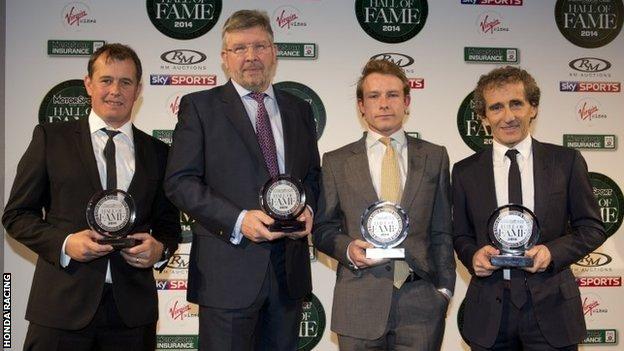 Twenty-time Isle of Man TT winner John McGuinness has been inducted into the Motor Sport Hall of Fame alongside Alain Prost and Ross Brawn.

He is only the third motorcycle racer to receive the accolade following Giacomo Agostini and John Surtees.

"To see my name up there with so many greats of our sport is just a massive honour," the Morecambe rider said.

His victory in last year's Senior TT took his tally to 20 and moved him within six of Joey Dunlop's record.

"I was first put on a motorbike when I was three-years-old by my dad, and I've come a long way since then.

"Competing in the TT is such a thrill. Just to ride it is exhilarating in itself and to win there is really special.

"I never honestly thought I would be standing here with 20 wins. If I get one or two more, that would obviously be fantastic but, if I don't then, I've still had a great career and it certainly won't be through any lack of trying."