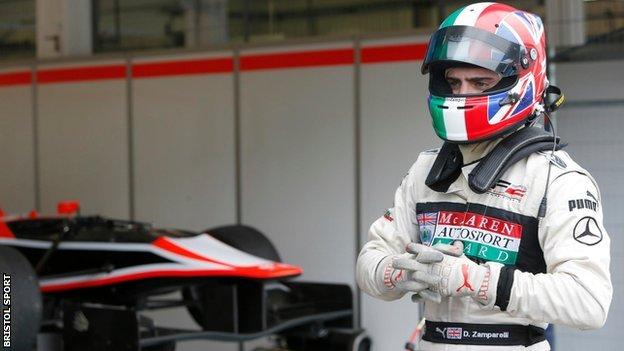 The 21-year-old competed for Marussia in last year's GP3, which is two tiers below Formula 1, and finished 18th in the drivers' standings.

He has now been recruited by the French racing team, who are looking for a fifth consecutive championship title.

"Signing for ART is a massive move," he said. "I'm so excited to get to race for a team with so much history."

GP3 was launched in 2010, with the aim of giving young drivers a chance to develop their driving skills, with the view to moving onto GP2 and Formula 1.

All but one GP3 event will follow the Formula One European calendar, giving drivers experience of racing in the Grand Prix environment.

Zamparelli added: "The hard work has already started and I cannot wait to get back in the car and start testing at the end of March.

"The aim is simple, to go and win as many races as possible and ultimately take the championship crown at the end of the year."

After impressing during his first year in the FIA Formula Two Championship, Bristol Sport-funded Zamparelli was signed to Marussia last March, and was part of the Formula 1 team's young driver programme.

His new team have won the team's championship in GP3 every year since its inception in 2010 and the drivers' championship twice.

Racing team principal Frédéric Vasseur added: "In 2014 we will fight to win our fifth title. Despite his young age Dino has all the qualities to help enrich us and our record in a championship that has become a must on the international scene."