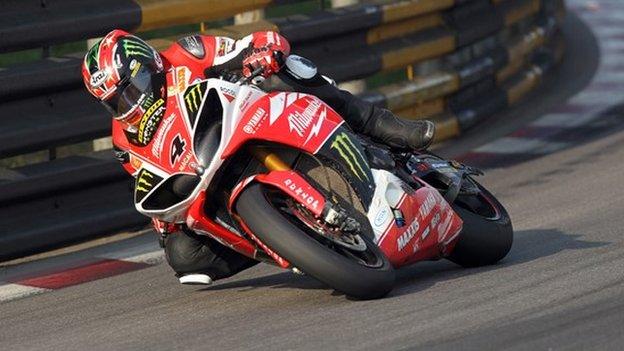 Ian Hutchinson is to make his Isle of Man TT road racing comeback at this year's event, it has been confirmed.

Hutchinson, who in 2010 was the first rider to win all five solo TT races, will compete alongside Josh Brookes for the Milwaukee Yamaha Superbike Team.

The Bingley racer has undergone 29 operations in the past three years following a crash at Silverstone.

Pole, fastest race lap and the win at Macau signalled to the world that I was back

He made a remarkable road racing return in November .

The eight-time TT winner continued: "If I'm honest I wasn't right in 2012 and, although it was a really difficult decision not to compete last year, I had to get properly sorted.

"The Yamaha's will be really well set up and I'm confident that I can get in among the front runners again at the TT.

"Pole, fastest race lap and the win at Macau signalled to the world that I was back."

Both Hutchinson and last year's fastest newcomer Brookes will contest the Superbike, Supersport and Senior TT races in June.

Australian Brookes, who recorded the fastest ever lap by a newcomer of 127.726mph in 2013, said: "I was pretty frustrated when it looked like I wouldn't be able to go back to the Isle of Man this year.

"As soon as last year's race was over I was already working out how to improve on the Mountain Course.

"I'm delighted that the team will be there and the hard work really starts now preparing to improve on last year's lap times".

Both men will also contest the .