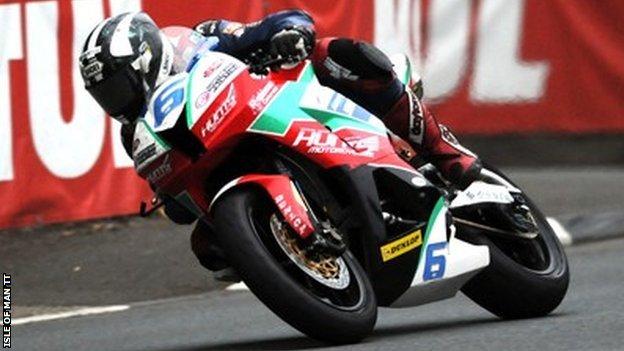 Northern Ireland's Michael Dunlop recorded the quickest Supersport lap of the week in difficult conditions at the Isle of Man TT on Thursday.

Scotland's Keith Amor was fastest in the Lightweight session at 116.20mph.

With damp conditions on the Mountain section, clerk of the course Gary Thompson opted not to allow Superbike or Superstock machines out on Thursday.

In their absence the sidecars led the session away, with John Holden and Andrew Winkle quickest at 111.586mph.

The quickest crew of the week, Dave Molyneux and Patrick Farrance, stopped with a puncture.

The session was also disrupted because of a "civilian emergency" at Quarterbridge, which organisers said was "not related to the racing".

The sidecar crew of Ewan Walker and Dickie Gale were taken to hospital by air ambulance following an incident at Pinfold Cottage.

Gale was reported to have back and neck injuries whilst Walker's injuries were described as "minor".

Qualifying continues on Friday at 18:20 BST with the Superbikes first away.

The opening six-lap Superbike race is scheduled for 11:00 BST on Saturday.