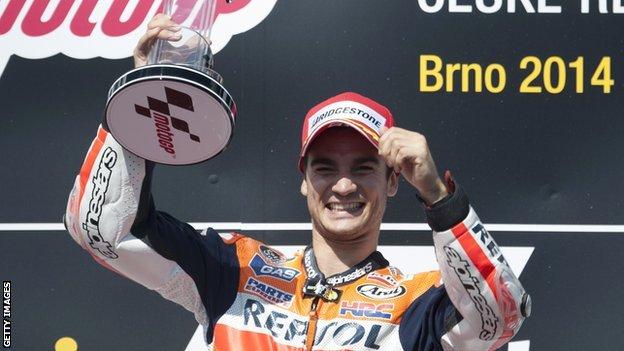 Reigning champion Marquez had won all the previous races this season but failed to make the podium in Brno and finished a disappointing fourth.

He said: "I tried to do my best but today it was not possible.

Marquez was a strong favourite to beat Mick Doohan's 1997 record of 10 consecutive wins that he equalled with victory at Indianapolis on 10 August.

But a sluggish start from pole saw him slip to sixth place on the opening lap as Lorenzo took advantage with the early lead.

Pedrosa trailed Lorenzo's Yamaha before overtaking him with 17 laps remaining.

Marquez never looked likely to challenge for the win as he struggled with the pace but fought back to third before being passed by nine-time champion Rossi near the end.

Pedrosa's victory was the 26th MotoGP win of his career to match his bike number.

He said: "Overall I had a good experience at this track. It's a little difficult when Marc is winning all the time so I'm very happy."

Britain's Cal Crutchlow retired with 14 laps to go on his Ducati, who he is leaving to join Honda for 2015.

Spanish rider Esteve Rabat took his fifth Moto2 victory of the season to stretch his overall lead while Alexis Masbou of France won the Moto3 category for his maiden victory.

The next MotoGP race is at Silverstone on 31 August.