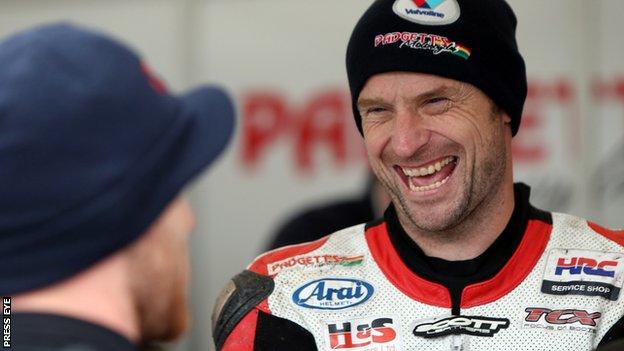 New Zealander Bruce Anstey dominated the Classic TT Formula 1 race in the Isle of Man on Tuesday with a victory margin of over one minute.

The Yamaha YZR500 ride eased away from his challengers to win by 1:12.36 from England's James Hillier with Russ Mountford completing the podium.

Anstey also set a record lap speed of 123.894 for two-stroke machines over the Mountain Course.

Michael Dunlop was second early in the race before retiring.

The Ballymoney man, who won the race last year, was 15 seconds behind Anstey when the riders came in for fuel at the end of the opening lap.

Dunlop was out of the race on the next lap, forced to retire on his Suzuki GXSR XR69 machine.

Anstey is a man in form as he followed up a double at the Ulster Grand Prix with another another impressive display in the Isle of Man.

"It was the perfect race - the bike never missed a beat and everything was spot on and I just had a big smile on my face for the three laps."