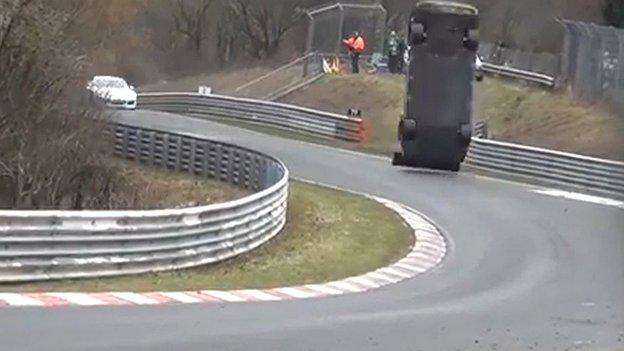 A spectator has died after a crash involving a British driver at the VLN Endurance Championship in Germany.

Jann Mardenborough crashed his Nissan GTR Nismo in the first race of the season at the Nurburgring Nordschleife.

The 23-year-old driver from Cardiff was taken to hospital for checks while several spectators were also injured.

"The team is fully co-operating with the race organisers to conduct an immediate and thorough investigation," a Nissan statement read.

Mardenborough's car flipped and left the track at high speed as it negotiated the Flugplatz section of the historic circuit.

After crashing through the trackside fencing it landed on its roof in a spectator area.

"Several spectators were injured in the incident and despite immediate efforts one of them succumbed to their injuries," added the statement from Nissan.

"The others have been taken immediately to hospital for care.

"The driver, Jann Mardenborough, got out of the car and, after initial checks in the circuit medical centre, has been taken to hospital for further routine checks."

Nissan added: "Today's events have been a tragedy.

"We are all deeply shocked and saddened by these events and our immediate thoughts go to the deceased, those injured and their families and friends."

Race organisers VLN also issued a statement saying they were "deeply saddened" and "their thoughts were with families and friends of the victims".

Mardenborough, whose father Steve played football for Wolves, Coventry, Cardiff and Swansea, had not raced until 2011 when he beat 90,000 entrants to win the GT Academy, a video-gaming competition sponsored by Nissan and based on the Gran Turismo series of PlayStation games.

Mardenborough has since competed in the British GT Championship, Le Mans 24-Hours and the 2014 GP3 series.