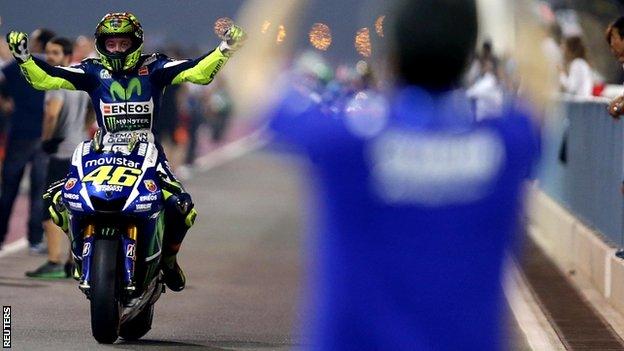 Italian legend Valentino Rossi won the opening race of the 2015 MotoGP season in a thrilling finish in Qatar.

Andrea Iannone on the Ducati made it an all-Italian podium, with Spain's two-time defending champion Marc Marquez back in fifth place.

Marquez won the opening 10 races in 2014 but made a dreadful start to the new season as he was forced off the track and slipped to the back of the field.

The 22-year-old fought his way back up to fifth but could not challenge Rossi, who began the race eighth on the grid but charged to the front.

Rossi, who won the last of his seven titles in 2009, and compatriot Dovizioso enjoyed a dramatic duel in the closing stages, with the former champion defending a small lead over the final two laps.

"This was one of the best victories for me," said Rossi. "The bike was fantastic, I never gave up but it was a real fight with the Ducatis and the Hondas who were really strong.

"I'm so happy for me, for the team and for Yamaha. The second part of the race was really good and I'm very happy because we had difficulties in testing and practice but my experience helped today.

"This is a great, great victory but I had a good feeling this morning."