Double amputee Billy Monger says his third-place finish in the opening race of the British F3 championship at Oulton Park was "surreal".

The 18-year-old had both his legs amputated after a crash last year.

He was driving a specially adapted Tatuus Cosworth car, which has a throttle on its steering wheel and a single pedal for braking with his prosthetic leg.

"It's a bit surreal but an awesome feeling even to be back," he said.

"If you had told me that I'd have been on the podium first race of the year, I would probably have said you were lying to me.

"To get out there and prove I'm competitive is more than I could have ever have asked for."

Monger, who was involved in a near-fatal crash while racing in Formula 4 at Donington Park last April, started fifth before earning a podium place on his debut.

Linus Lundqvist won the race with Nicolai Kjaergaard in second.

Monger walked on to the podium to collect his trophy and received a rapturous reception.

"The first people I've got to thank are all the boys at Carlin for getting me back behind the wheel," he added.

"Especially Grahame 'Chily' Chilton, everyone who has supported me, people like Jonathan Palmer, family and friends and everyone that supported me after my accident, without that support I wouldn't have been out on the grid today, so it's great to be back." 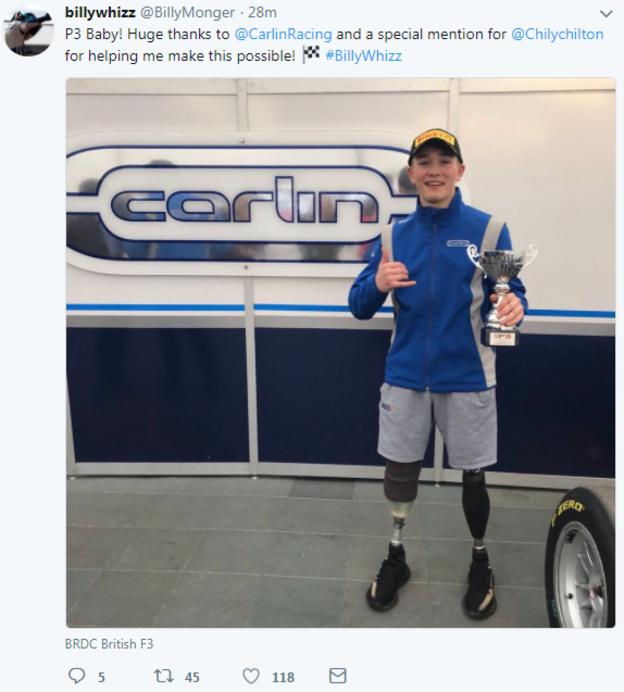