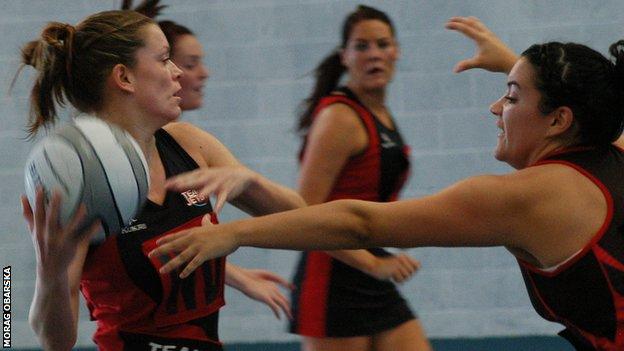 Jersey's Team Jets have been promoted to netball's South West Division One after league officials confirmed two sides will be going up.

Jets have won all 15 of their games so far, but there had been confusion over how many teams would be promoted.

An e-mail from organisers on Friday evening confirmed the news the islanders had been waiting for.

"It's definitely where we need to be, the girls have been outstanding all season," said coach Linda Andrews.

"They were looking at changing the play-offs and regional league structure for next season.

"We've been waiting for the confirmation of what's going to happen."

This is their first season back in the national league structure, and they find themselves 19 points clear of second-place Saints Cornwall, but have played more games than all the other teams in the division.

Andrews is already looking ahead to next season.

She told BBC Radio Jersey: "As you can see by the results we're far better than everyone else in that league apart from Saints.

"We need to be in Regional League One, that's the standard we're at.

"Everybody's been saying to us that we'll probably get promoted straight away in that one as well, so that will be our aim for next season."