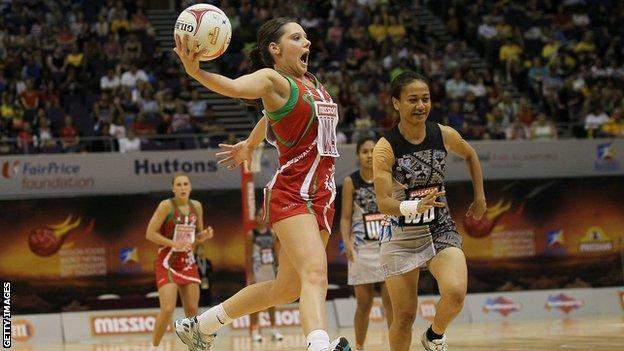 The Wales netball team suffered a 65-40 defeat to England in the Netball Europe Tournament in Sheffield.

The defeat followed Wales' 60-31 victory over Scotland in the tournament opener and they now need a win over Northern Ireland in their final game.

Wales are currently ranked 11th in the world and are looking to climb the rankings to ensure a place at the 2014 Commonwealth Games.

The 12-strong squad includes 10 of the Celtic Dragons side who finished fifth in Superleague, together with Loughborough Lightning shooter Becky James and experienced goalkeeper Jamilla Abbott.

James won her 50th cap, while the only uncapped player is Australia-born centre court player Kyra Jones, who is qualified by residence.

Emma Thomas withdrew from the squad in Sheffield due to illness and was replaced by Leanne Thomas from North East Wales.

Wales have also announced they will tour to the Pacific Islands, where they will also play Scotland, in October.